A brief history of The Manx Classic

Beginning from the famous TT Grandstand, the Willaston course ran in a clockwise direction, taking in Parkfield Corner, Ballanard Road, Johnny Waterson’s Lane, Cronk Ny Mona, Signpost Corner and Governor’s Bridge – a similar course (omitting the longer Signpost to the Manx Arms section) to that used for the 1936 IV RAC International Light Car Race and the British Empire Trophy races in the 1940s and 1950s.

Lord Montague, and his team at the Beaulieu Motor Museum brought the 1904 Gordon Bennett Trial winning Napier to the island, especially for the event, and put it on show at the TT Grandstand.

With a little help

The Club’s Directors at that time were Robin, Earl of Northesk, Peter Bolton, Graham Bolton, Patrick Carroll, Tom Dootson, Dixie Dean and Graham Warwick. It was supported by the Vintage Sports-Car Club (VSCC), Lord Montague and the staff of the Beaulieu Motor Museum, the British Motor Racing Marshals Club, under the lead of John Felix, and the Longton & District Motor Club, which ran the Hillbery to Kate’s Cottage hillclimb. The event was sponsored by Merlin International Properties Limited.

The event was a great success and attracted a good number of competitors. It was run with the help of a large number of officials, marshals and helpers from both on and off island.

A number of exciting courses

The following year saw the inaugural Douglas Promenade Sprint. Held on the afternoon of Thursday 20th September, the cars ran in a northerly direction, from Broadway to the Summerland complex at Derby Castle 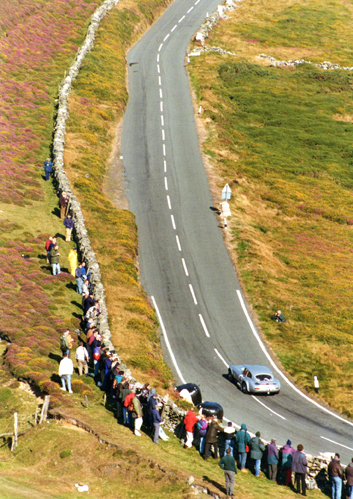 Subsequent years have seen events at Ramsey Promenade (ran only once in 1991), Creg Willey (from 1994), Lhergy Frissell (first run in 1992), Bray Hilll (from 2006 to 2008) and Jurby (from 1994). More recently, the Governor’s Sprint, which starts from the pitlane at the TT Grandstand, runs along Ballanard Road, around the Governor’s Dip to finish at The Nook on the ‘old’ TT road, was introduced in 2010. It runs today, with the Creg Willey Hillclimb and the Lhergy Frissell Hillclimb as the current three-day Manx Classic.

In 1998, the tenth anniversary, the event ran from 23rd to 27th September, with a practice for the Willaston Pursuit Sprint practice on the Thursday and the race on the Saturday, interspersed with the Sloc Hillclimb on the Friday, and a race and sprint meeting at Jurby on the Sunday. The Thursday evening saw the Manx Airlines sponsored Douglas Promenade Sprint, from 7pm to 10pm, along Loch Promenade, from the Sea Terminal to opposite the Gaiety Theatre.

For the 10th anniversary in 1998, many of the instigators remained closely involved with the Club: Tom Dootson and Geoff Duke OBE were the Club’s Vice Presidents; Graham Bolton and Patrick Carroll were Directors, alongside Norman Brewitt and Harry Pease. Allen Lloyd had been appointed as Chairman in 1997. The Club’s current Chairman, Bob Riding, had been appointed to the Committee and Neville Hay and Chris Machin were the Club’s official commentators.

The early years of the 21st century

The Club continued to run events at Willaston, the Sloc, Douglas Promenade and Jurby until all motorsport events were suspended on the island in 2001, due the foot and mouth outbreak in the UK. The year 2000 was to be the very last time the Willaston Pursuit Sprint ran.

Since then, the Club has focussed on running sprints and hillclimbs each spring, using both the well established Sloc and the much-loved Lhergy Frissell, the longest hillclimb in British Isles and, of course, part of the course used for both the Gordon Bennett of 1904 and the first RAC TT event in 1905. A “Three Hills Challenge”, using the two courses plus the Creg Ny Baa back road, was run in 2002 and 2003. Bray Hill to the TT Grandstand was used for three years between 2006 and 2008.

In 1989 the Manx Motor Racing Club returned the spectacle of motor racing to the closed public roads of the Isle of Man, and today’s Manx Classic continues the unique heritage begun by the Edwardian visionaries in 1904.

Since 2010, the Manx Classic has been a three-day, three-venue event, held at the end of April each year. Comprising the Governor’s Sprint, held as an afternoon practice and early evening timed event, on the Thursday; the Sloc Hillclimb on the Friday and the finale, the Lhergy Frissell event, on the Saturday.

In 2011, the event saw cars from twelve decades take to the famous closed public roads of the Isle of Man: From a 1909 Riley to a 2011 Porsche, the cars’ production years echoing the decades that four-wheeled motorsport has taken place on the island.

Thank you, to all our volunteers!

The Manx Classic would not be possible without the hard work and dedication of a large number of volunteers, who have worked hard year-in, year-out, for more than 20 years, in numerous roles, from behind-the-scenes paperwork to course construction and marshalling. The Manx Motor Racing Club would like to thank each and every one of them.

Do you have any stories to share or photos of the early Manx Classic events? We'd really like to hear from you! Please contact us, by email at: This email address is being protected from spambots. You need JavaScript enabled to view it. or by post to: 58 Ballachurry Avenue, Onchan, Isle of Man IM3 4BA. Thank you!