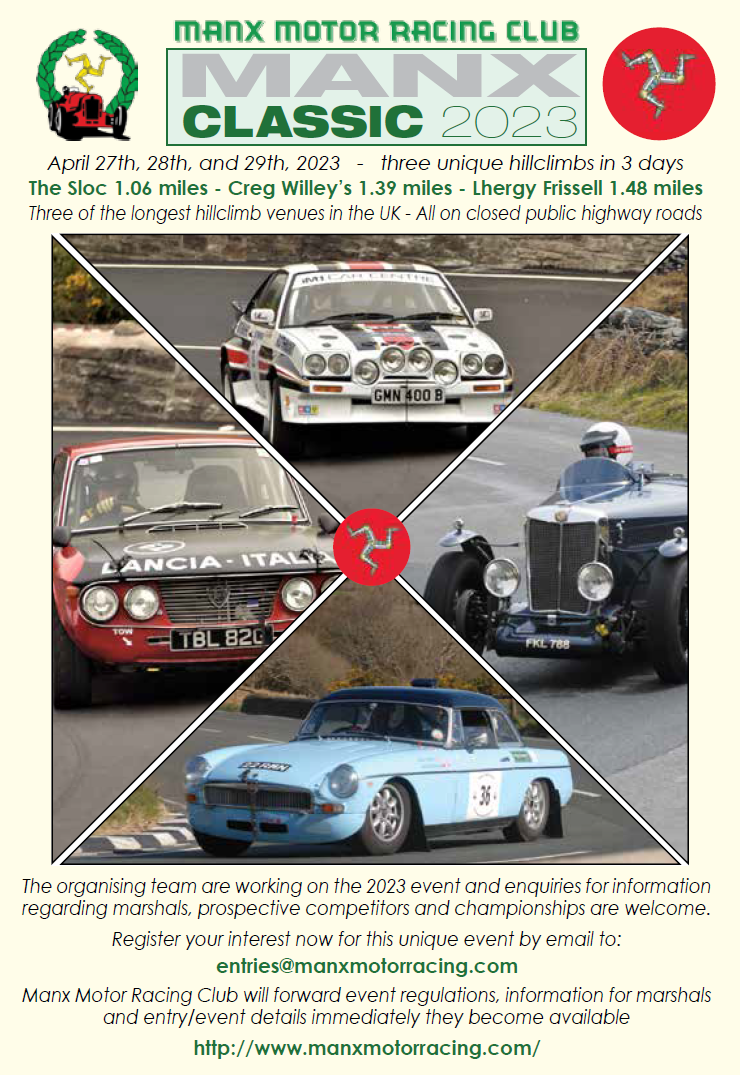 LATEST NEWS - The Manx Classic for 2023 has now been approved, so put this date in your diary for next year and start to plan you visit!

The Information Sheet displayed here can be downloaded as a PDF HERE!

Make sure you regularly check this website for the latest information!

Welcome to the home of the Manx Motor Racing Club

Founded in 1987, the club organises closed-roads events for vintage, classic and modern sports cars in the Isle of Man - the road racing capital of the world.

Since 1904, when the first Gordon Bennett Races were held here, the Isle of Man has offered motor racing enthusiasts a perfect mix of racing heritage, challenging roads and picturesque scenery.

The Manx Classic has been run for more than twenty years, and the Manx Motor Racing Club has a great track record of producing exciting and friendly motorsport events for classic and sports cars.

The Club was formed with the aim of holding friendly and competitive motorsport events, specifically to attract vintage and classic cars to the island to race on its closed public roads, made famous by the ‘around the houses’ racing so prevalent on the island in the earlier years of the century. Two of the event’s instigators, Peter Bolton and Geoff Duke, had taken part in the British Empire Trophy races, around Willaston, in the 1950s. The Earl of Northesk was a racing driver too, racing as Robin Carnegie before he inherited his title.

A Vintage Sports Car Club event on the island in 1986, at which Robin Northesk was present, gave the impetus for an event and, together with a group of keen enthusiasts, the Manx Motor Racing Club was established.

The first Manx Classic, held in 1989, ran over four days and comprised of the Willaston Pursuit Sprint and the Hillberry to Kate’s Cottage Hillclimb.